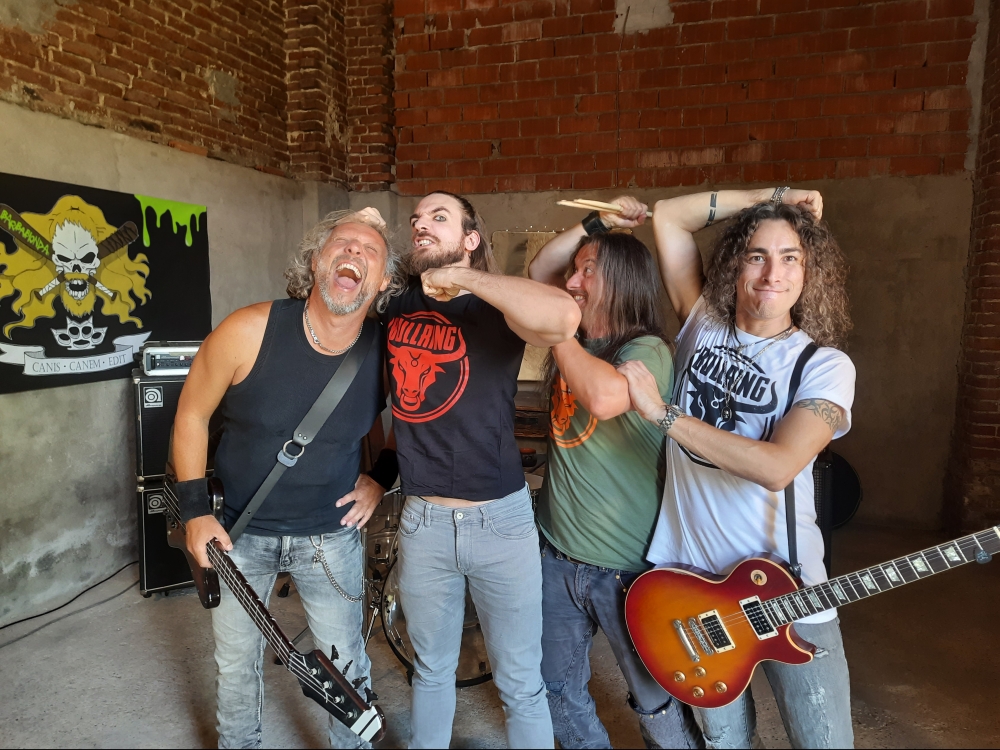 Street Symphonies Records & Burning Minds Music Group are proud to present the video of "Nothing Except Yourself", the latest single by Italian modern hard-rockers Bullring. The song, written by the band in collaboration with Pierpaolo "Zorro" Monti, was conceived as the new official entrance theme for wrestler Rick Barbabionda, former Interregional and Tag Team Champion of ICW - Italian Championship Wrestling. "Nothing Except Yourself" was mixed and mastered by Alessandro Ascari @ Flatroom Studio, and is available on all digital platforms. The official videoclip was shot by Arianna Angelico.
"When Zorro asked us to write a song for a wrestler, we immediately said yes", the band states. "Bullring and wrestling have actually several things in common, such as the exaggerated acts, the show, the physical strength and a loud crowd: a straightforward roughness and energy, originating from a bunch of people who sacrifice everything for their passion. We are not soulless, rigorous music masters ourselves, we identify more with rude woodsmen, you know? We took simple yet powerful guitar riffs and sleazy bitter vocals to create an explosive chorus. We were driven by the strength and the desire to fully express it, and that's how "Nothing Except Yourself" was born. We composed it on the spot and we are really proud of how it sounds, it's very Bullring-style and it's an excellent entrance theme. The lyrics, written by Zorro, were a crucial part of the creative process and completed the song perfectly. We had an amazing experience on the set for the video, the complicity among the band, Rick and the staff was immediate and we all had so much fun. Maybe one day we'll be able to play Rick's entrance theme live, right before one of his matches...he's definitely our favorite Italian wrestler, it would be great!".
Rick Barbabionda adds: "Barbabionda represents the ignorance getting the better of intellect, the raw strength that prevails over the technique, it's the force within me that made me undertake this career six years ago and that still pushes me to do my best. My character has recently undergone a dangerous regression, rebelling against his mentor and becoming excessive: like a wild dog on the loose, he faces all his enemies in a resolute attempt to conquer wins and belts. "Nothing Except Yourself" is pure ferocity, it's the fighter's scream that, right before a match against his rival, tells the audience everything about him and that he's going to hit hard, as much as Bullring's sound. I also had the chance to work again with Arianna Angelico, a good friend of mine, after the collaboration on her project about Italian wrestling 'InsideICW: tra le corde': thanks to her and our hard engaging work, we managed to translate all these emotions into images, into a tough, in-your-face video."
Buy Digital /Stream "Nothing Except Yourself" now: https://www.burningmindsgroup.com/street-symphonies/buy/133
For more info about ICW - Italian Championship Wrestling visit:
www.icwwrestling.it
www.facebook.com/Italianchampionshipwrestling
Bullring is:
Remo Ferrari: Vocals & Bass
Dave Pola: Guitars
Luca Ferraresi: Drums
Web/Social Links:
www.bullringband.com
www.facebook.com/bullringband
www.instagram.com/bullringband
www.burningmindsgroup.com/street-symphonies
www.facebook.com/streetsymphonies
www.instagram.com/burning_minds_music_group
GO TO ALL THE NEWS